“If you go against one, you are dealing with a whole system.”
An Interview with the artists Camilla Goecke and Marieke Helmke
elena buscaino

"Since summer 2019 we have been working on a sound work about sexualised discrimination, harassment and violence at the Universität der Künste (UdK). Students are particularly affected by this and in our opinion the topic is not addressed openly enough. As a result boundary crossing behaviour is increasingly produced, and those affected are not sufficiently protected. By making this topic visible, we see our work as a contribution to the counteracting of sexualised discrimination, harassment and violence at the UdK. We primarily address those affected, and moreover anyone who is studying, working at or visiting the UdK.

In nine interviews, students and alumni talk about their experiences of sexualised discrimination, harassment and violence, especially perpetrated by lecturers, but also by students or other people who work at or visit the UdK. The interviews focus on subjective experiences and not theoretical knowledge. The interviewees have placed great trust in us and shared very personal content. Due to the sensitivity of the interview content, we have decided not to publish the work online.

"(...) I haven't had an interview yet where nothing came of it. It was always an interesting aspect that has not been told yet. It's also interesting when the contents are repeated, because that shows a structural pattern. It often happens (...) that people say very similar things. That's the thing: that they're not isolated cases." (from an interview)

Additionally:
9 People I, Camilla Goecke, approached did not want to do an interview because of strong shame and/or fear of consequences. Due to these feelings often no internal complaints are filed or police reports are made.
10 It was only through the description and summary of the work that students turned to us, as they became aware that something similar had happened to them.
11 Students or other persons to whom those affected have turned for help cannot always provide them with sufficient support, as they have also been unable to classify sexual discrimination, harassment and violence and/or are overburdened.
The interviews and further discussions we have had with students show, with the exception of the act of rape, that every form of sexualised discrimination, harassment and violence occur at the UdK!

We consider sound as a suitable medium for our artistic work. On the one hand it is a medium dominated by cis men, on the other hand we feel that active listening is an important strategy to draw attention to this topic. Through active listening, marginalized voices with regard to sexualised discrimination, harassment and violence are made audible at the UdK. It also involves reflecting on one's own position: How do I listen? Which voices do I pay attention to? Which voices are drowned out, possibly also by my own? Through which "filter" do I listen? Does my voice find space and resonance?

At this point we would like to point out that our work shows only a small section of the UdK. However, as the contents show clear structural discrimination, we are in favour of a university- wide study and an annual survey of students. In addition, we believe that there is a need for more information and sensitization work by all those working at the UdK, as well as the establishment of "safe" rooms and low-threshold counseling for and by those affected within the university. We would also like to encourage students in particular to confront sexual discrimination, harassment and violence (at the UdK). Even though this can be very stressful and emotional, the examination of this topic has "empowered" us; we have found a clearer language for this topic, we can clearly name and classify forms of sexualised discrimination, harassment and violence and have been able to support some of those affected." 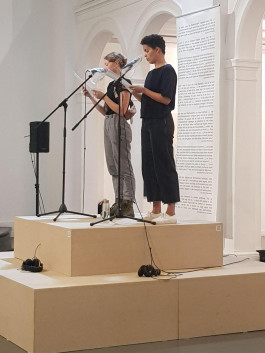 Marieke Helmke (left) and Camilla Goecke (right) during their reading performance at the exhibition "Animation Of Dead Material" at Kunstraum Kreuzberg, 30.08.2020.

AG Critical Diversity is an initiative
by associates of