Democratisation of Art Schools: A Conversation With Sophie Vögele 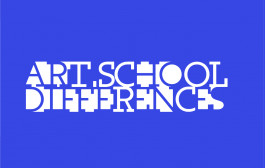 One aim of the project was to identify fields of action for a democratisation and pluralisation of the participating academies. The project was based on the preliminary study Making Differences: Swiss Universities of the Arts (PDF), which was carried out in 2011. Art.School.Differences is characterised by a determined connection between research and practice: The project involved academic and participatory research and engaged diverse players from the institutions as co-researchers. An educational programme on the topic of social inequality in the domain of the art school accompanied the co-research. It consisted of five colloquia to which all interested persons from the school or other institutions were invited. On the basis of discussions led on selected texts within the identified fields, a collection of texts commented and supplemented with a glossary are currently being developed – the Reader Art.School.Differences.

Sophie Vögele researches and teaches as a research assistant in the field of art education at the Zurich University of the Arts. She studied Gender Studies and Ethnology in Basel, Geneva and Heidelberg. She was then a member of the doctoral program in Sociology at York University Toronto for several years, where she also taught. She is currently a research assistant and lecturer at the Zurich University of the Arts. Her research interests are the complexity of processes of change (othering) in educational institutions and the arts, its critique, and institutionalised mechanisms of inclusion and exclusion from a feminist-post_colonial perspective.

AG Critical Diversity is an initiative
by associates of